Why are Hong Kong’s young people protesting? Fighting for their future

[Mar 27, 2016] Out with the old: The political awakening of a new generation of Hongkongers

[Sep 26] The teenager who defied China: Joshua Wong was one of the faces of Hong Kong’s Umbrella Revolution and now he has drawn a roadmap for democracy

[Dec. 2, 2015] China Daily: Self-righteousness closes the eyes and minds of our youth

[Dec. 7, 2015] Hong Kong companies adopt Shenzhen interview tactic — It may be to check if a job applicant is ona mainland blacklist for political reasons

[June 15] Pupil’s poignant palindromic poem praised: A poem written by a pupil in Form 3 went viral in Hong Kong last week after the teacher, Eric Windarcher, uploaded it onto the internet. Hold your umbrella:

Our city is dying

Never will [anybody] say

We can fight against the ruthless government.

Under the pepper spray and tear bomb

We can never succeed

It is wrong to believe that

We can build our wings and fly high.

Our goals can only be fulfilled in fairytales,

‘The revolution is not an apple that falls when it is ripe. You have to make it fall’

Put down your yellow umbrella.

Let the communist Chinese government take away all the core values we treasured.

Give up protesting for political freedom.

We know it is a lie.

Unless we turn things around

A documentary on the anti-parallel trade youth 反水貨客少年 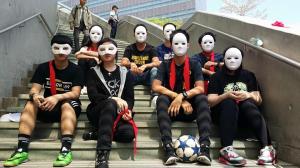 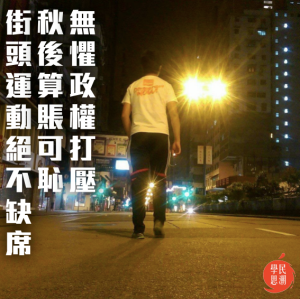 CY Leung urges young Hongkongers to ‘fight back’ against radicals

But three in 10 young people unhappy with HK situation and 47 percent of the respondents between 20 and 24 favor upholding justice through civil disobedience.

Dramatic upsurge in the no. of HK students applying to study abroad after occupy 雨傘運動後 赴英升學港生大增

Unhappiness over the 79-day street occupation last year by democracy activists is a key factor weighing on the minds of the people aged 50 and above, a recent opinion poll suggests… According to the survey, around 10 percent of even those who claimed to have been pro-democracy camp supporters and aged over 50 said they would consider voting for pro-establishment candidates in the upcoming district election… around half the interviewees held a very negative impression over the Occupy campaign, while 30 percent remained neutral…The Occupy movement, it is now acknowledged, has widened the rifts in Hong Kong society, with the youth and the elderly mostly standing on opposite sides…The number of registered voters above the age of 61 has surged to 981,489, making up for one-third of the total registered voter base. In comparison, registered voters aged 18 to 30 saw their number reach 580,000.

It does not look good that young people are so alienated that they did not register to vote:

Newly registered voters for the November 2015 District Council elections are overwhelmingly retirees (two thirds of newly registered voters are over 56) and many young people between the ages of 18 and 30 remain unregistered. This is a very serious challenge, more so than the lack of broader support for the occupation itself, and indicates the lingering sway of disenfranchisement even among Hong Kong’s younger population. (One year after Occupy, political alienation of the young still the major challenge for democrats)

[July 7] Some young protestors are supported by their parents 我的社運爸媽

Young generations are increasingly worse off. 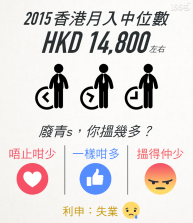 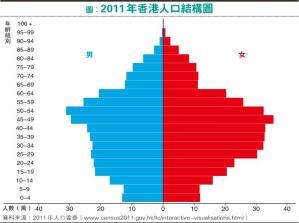 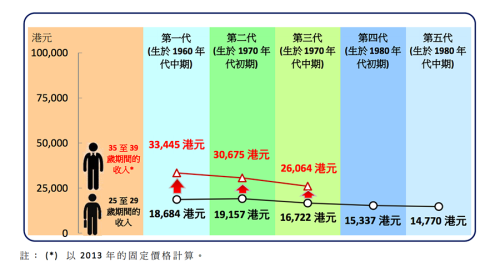 However this episode of the Umbrella Movement turns out, effective governance in the long-term requires some accommodation with today’s young people who will easily live for another 70 years. They are restless and fearless — as they have been “baptized” by pepper spray, tear gas, police manhandling, and thug violence.

In a poll released [in Dec. 2014], only 8.9 percent of Hong Kong residents identified as Chinese, the lowest figure ever recorded. And the trendlines aren’t good for Beijing: The territory’s younger generations, epitomized by the bespectacled Wong, supported the protesters the most. This could turn into a long-term problem for the Chinese government, said Trey Menefee, a lecturer at the Hong Kong Institute of Education who has observed the protests firsthand.  (Hong Kong’s Protests Are Over—for Now http://www.theatlantic.com/international/archive/2014/12/hong-kongs-protests-are-overfor-now/383703/)

According to another HKU survey, the Hong Kong Federation of Students passes the recognition benchmark for the first time to enter the “top 10” list and also ranks first while Scholarism goes up three positions to rank 5th. Lian Yi Zheng on Hong Kong’s Occupy Generation:

By the time the Occupy Central movement is eventually dissolved — by force or of its own resolution — and its leaders make good on their promise to submit themselves to arrest, an entire generation of pro-democracy citizens will have arisen: young and dynamic, dauntless and relentless. It is a force that the Beijing plutocrats and their emissaries in Hong Kong will have trouble getting used to. Political business will no longer be as usual.

Hong Kong’s Summer of Love and the Umbrella Generation:

From its origins as a protest movement with a narrow set of political demands, the Umbrella Movement has morphed into a defining generational moment, one whose impact will be felt even stronger in 2027 than in 2017. http://www.huffingtonpost.com/matt-sheehan/hong-kong-summer-of-love_b_6265190.html?fb_action_ids=10152513442516623&fb_action_types=og.likes

For Hong Kong Protesters, a Spark to Keep Alive:

“This is a lifelong movement,” she said. “We cannot give up. Because we belong to this place. If we want this place to be well, we cannot just leave it.” (http://www.nytimes.com/2014/12/02/world/asia/hong-kong-protests.html?_r=0)

In a survey conducted by Ming Pao Daily, 47 percent of student respondents said what they are most unhappy about at the moment is the way the government is dealing with political issues. Disputes on the political system, failure to ensure “Hong Kong people administering Hong Kong with a high degree of autonomy” and the shortcomings of local officials were among the factors cited by the students.

The source of Hong Kong youth’s frustration: Siegfried Sin says young people are, above all, angry at the uncompromising attitudes of the older generation, and the fact they have had no voice in society – until now 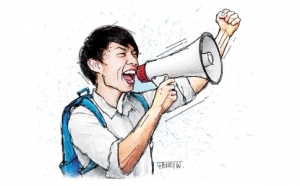 Listen to the young ladies: 傘不走的女聲 Do you hear the women sing

網片新人王 http://hk.apple.nextmedia.com/supplement/special/art/20150104/18989240 Who is Joshua Wong–what Scholarism is for? http://www.scmp.com/video/hong-kong/1601854/who-joshua-wong Joshua Wong, Taking Back Hong Kong’s Future http://www.nytimes.com/2014/10/30/opinion/joshua-wong-taking-back-hong-kongs-future.html?_r=1 Joshua Wong for Time’s person of the year http://time.com/3562179/time-person-of-the-year-poll/vote/42/ 學民思潮召集人黃之鋒 https://www.youtube.com/watch?v=swtcTvQKkSE “Lessons in Dissent” about Scholarism made earlier: http://lessonsindissentmovie.com/en/ Student unions want to withdraw from the Federation of Students after occupy

Beijing’s Liaison Office in HK is trying to make the HK Federation of Students more Beijing-friendly by influencing member student unions. A City U student disclosed that the Liaison Office was trying to bribe and threaten students running for elections to the student union: CityU student exposes threats and deals made and offered by leftists in order to infiltrate HKFS / 城大學生爆左派威逼利誘 滲透學聯

[Jan. 22, 2015] Why HK youth hate Leung even more after his policy speech: there are some problems with his tone when he said in his speech that he “needs to guide young people and university students through the process of understanding the constitutional relations between Hong Kong and the Mainland”.

The city’s biggest pro-establishment party conceded it had met “difficulties” in recruiting young people, as well as members from the commercial and professional sectors, meeting only half its target. http://www.scmp.com/news/hong-kong/article/1699804/dab-struggling-attract-higher-quality-membership-chairman-admits

Yet, the government appointed someone born with a silver spoon to head the youth affairs committee  劉鳴煒獲委青年事務委員會主席 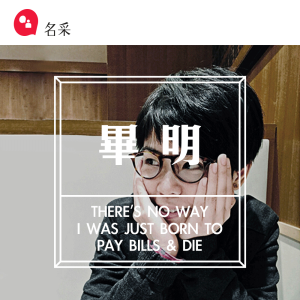 See also relevant section on the erosion of academic freedom

“What is so scary about these young people” 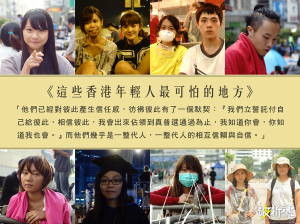 A Ming Pao survey of occupiers from Oct. 20 to 26 shows that students accounted for only 26% of the occupiers while the white-colored and the self-employed 58%. 後雨傘運動：告別政治冷感的年代. What could the government do about the adults? Who participated and why: 雨傘運動參與者調查(UMPP) https://www.facebook.com/umbrellaprofiling/info?tab=page_info,  https://docs.google.com/a/nd.edu/forms/d/17BHsKpLInRAKQ9vNTV9K2q2CpqGIxvisfBLUVRyHiyM/viewanalytics, 雨傘人類側寫 http://www.inmediahk.net/node/1029392

The government blames Liberal Studies for nurturing student activism and is trying to delete elements that encourage critical thinking and community participation.

The changes proposed include deleting a discussion point on young people’s motivations for participating in community affairs, and removing residents’ “feelings and responses towards … major events” as a recommended angle for another discussion point on how Hongkongers develop their identities.

To understand the government’s worry about critical thinking. the Examinations and Assessment Authority weighs in on which side undermines the rule of law:

The concepts of public security and the rule of law should not simply be interpreted as meaning executing or obeying the law, exam authorities say in a report on this year’s secondary school exams… its response seems to go against what many government officials’ and pro-establishment politicians have said about the Occupy Central civil disobedience protests, which they say undermine Hong Kong’s public security and the rule of law. (The Examinations and Assessment Authority’s report is publicly available at http://www.hkeaa.edu.hk/en/) 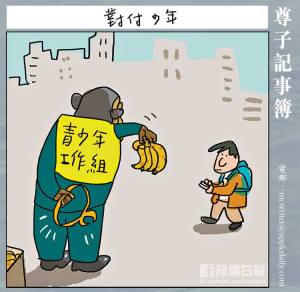 he wants the younger generation, his generation, to exceed in their studies and professional life, become the elite of the future, and in so doing transform Hong Kong’s government. “We need to arm ourselves with knowledge. Knowledge can be used to do battle,” he said. 有人說，旺角都亂成一鍋粥了這班學生怎麼還有心情在這裏「鳩」坐看書用電腦。為什麼不衝去旺角？起個檯檯凳凳托「柒」? 我想說：「朋友，你知道嗎？起這個遮打自修室的人就是一名中六學生，由9月25號，他便在金鐘，經歷過催淚彈，胡椒噴霧，看到過警察拿槍指著自己。晚晚鋪垃圾袋睡在馬路上，早上起身上學，晚上回家沖涼再到金鐘。他是個學生，他也曾到過旺角留守過。面臨Dse他有著龐大的功課與壓力，面對藍絲帶父母的指責辱罵，他心如刀割，他不放棄，明白自己在做些什麼，他始終一個人不放棄的到金鐘留守抗命。自修室的檯凳由第一張，到第二張，再到第十張，都是他和一些學生，伯伯一齊釘的。每一個釘，都是無數下鎚落，磨破了十指。直到今天「遮打自修室」已經長達50米，使用人數已經超過1500人。你并不懂這付出。 你若問他：「是什麼動力讓你這樣打造自修室？」 他一定會回答你：「我本來就是一個學生，我想參加公民抗命，但卻因影響學業功課而接近止步。有一天，我想到一定有許許多多和我同樣經歷的人。我要打造一個自修室，一個能一邊為香港奮鬥，一邊為自己奮鬥的公民戰場。我們生活在這片土地，被駕馭所有之上的政治權貴玩弄於股指之間。黑社黑警蠻橫當道，警民分化，社會分裂。我們身為學生，手無縛雞之力，衝在最前線並不是智舉，我們有的是無限的可能。修身，齊家，平天下。保持著一顆不變的心，將知識轉化為鎧甲，成為一個有用的人，將來才能改變這迂腐的社會。我雖然不是木匠，但我打算做就一定能做到，我想，這就是我搞起自修室的動力。」

The study corner at  Admiralty: 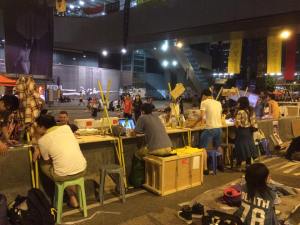 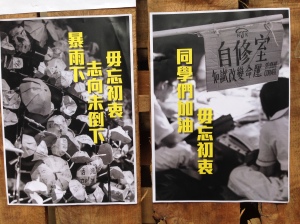 A student sketch of the study corner at 3am on Nov 9: 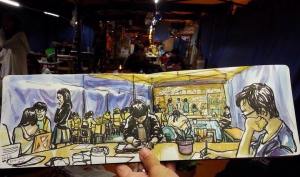 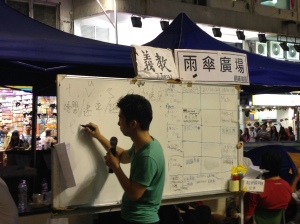 Their version of the Umbrella theme song: https://www.youtube.com/watch?v=atLWsAqc8nk

A video on what would happen in the future without genuine universal suffrage: http://hktext.blogspot.com/2014/10/hong-kong_29.html

The anti-patriotic education campaign in 2012: when Scholarism came of age Hong Kong Documentary Explores the Roots of Dissent http://www.chinafile.com/reporting-opinion/media/hong-kong-documentary-explores-roots-dissent

National education revival may be next firestorm to sweep HK http://www.ejinsight.com/20141027-national-education-revival-may-be-next-firestorm-to-sweep-hk/ The campaign against the high speed railway in 2010.

HK’s young people are not alone:

The Renaissance of Student Activism — “There has been a real powerful sense … that the future they were promised has been taken away from them.” http://www.theatlantic.com/education/archive/2015/05/the-renaissance-of-student-activism/393749/

8 responses to “Why are Hong Kong’s young people protesting? Fighting for their future”